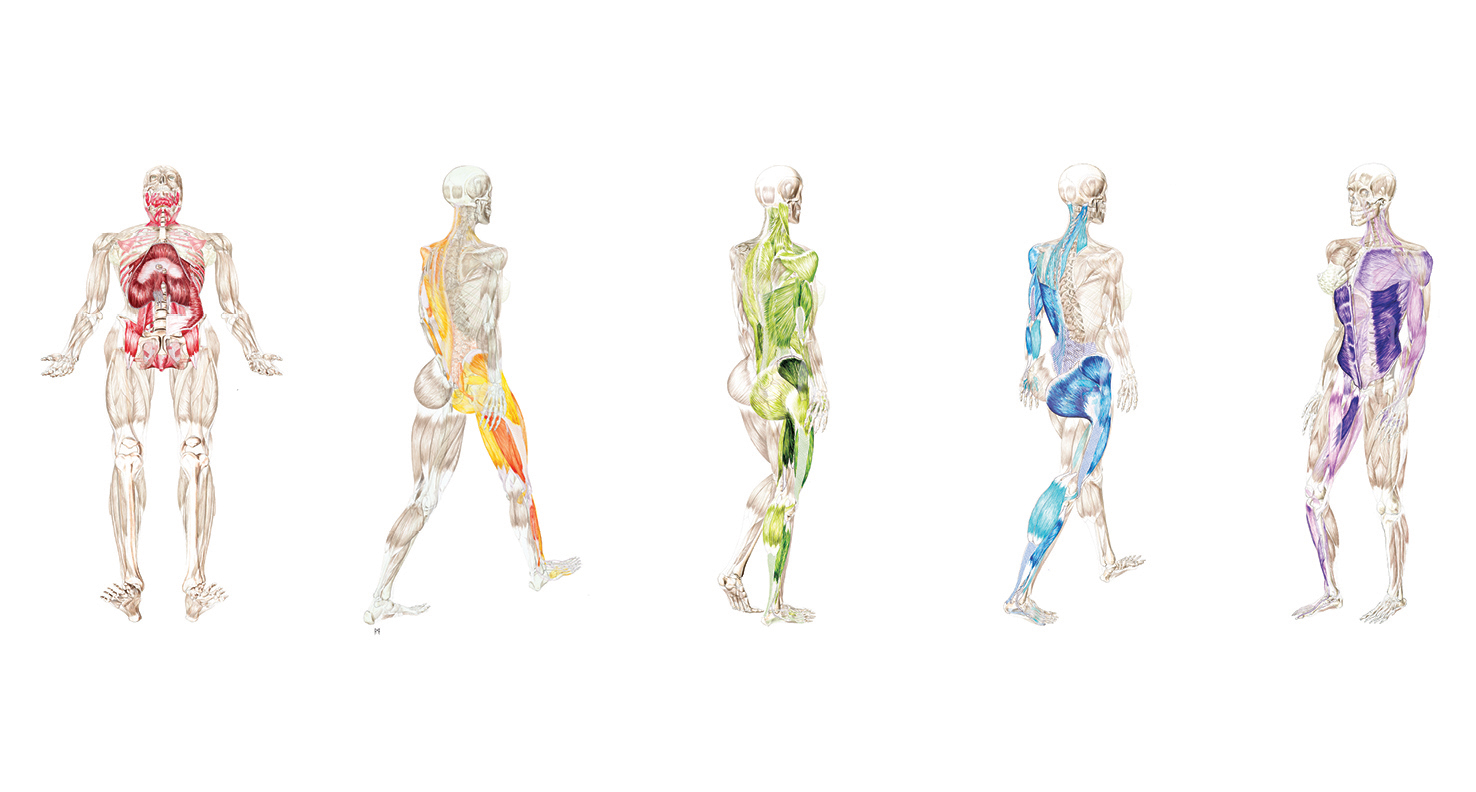 The 5 Primary Kinetic Chains are the master template for not only the walking gait as I’ve explored in my anatomy art, but for all locomotion and movement. Different movements have different relationships to gravity and the environment, and they use different muscular activations. (These activations are referred as kinetic chains, force transmission systems and sling systems.)
For example, swimming doesn’t have ground engagement like the strike phase of the gait. Instead, the spear phase (reaching through the water) is analogous to the deep longitudinal system. The kinetic sequence runs from the hand and through the anterior body to the opposite leg. The arm lines are doing the work in swimming that the leg lines are doing in walking.
Let’s dissect The 5 Primary Kinetic Chains as movement concepts:
1) Intrinsic:
The intrinsic system is the nervous system’s relationship to breathing. Our breathing apparatus, the mechanism of pressurization systems, has a direct effect on the autonomic nervous system. “You can’t own your movement until you own your breath.” This is about our breath mastery in relationship to our movement.
2) Deep Longitudinal:
The deep longitudinal system is about shock absorption. Shock absorption is the ability for kinetic energy to wave through the body joint by joint. If the wave is unable to move freely through the fascial system, that energy has to be absorbed in some way (such as a compensation). Imagine ocean waves breaking on the beach. The forces flow rhythmically absorbed by the sand. Now put a rocky buttress in front of the same wave and there is a tumultuous energy exchange of the crashing into the buttress.
3) Lateral:
The lateral system is the midline stability of the structure. The axis of the spine (axial skeleton) needs dynamic stability so that the appendicular skeleton has a platform by which to generate energy. Without the stability of the axis, the arms and legs will be impaired to generate power or work production.
4) Posterior Spiral:
The posterior spiral is the generation of stored elastic energy. The fascial matrix is a potential energy system. Efficient movement uses muscular activation to act on the fascial system. The fascial system spreads the load over as much area as possible which increases efficiency. As the energy winds up in the tissues, the potential release of that energy assists work production in the complementary movement.
5) Anterior Spiral:
The anterior spiral is the release of elastic energy into the complementary movement. Elastic energy can be released in different ways across the structure. When you are watching graceful athletes moving in profound ways, you are seeing elastic energy being stored and released in an efficient way. The energy is spread across the entire fascial fabric and the result is seemingly effortless movement.
These concepts are always present in integrated movement:
Breath~Shock Absorption~Axial Stability~Stored Elastic Energy~Translation of Elastic Energy
Categories: 5 Primary Kinetic Chains, Philosophy of Movement
Tags: 5 Primary Kinetic Chains, anatomy, Anterior Spiral, axial stability, breath, Deep Longitudinal, fascia, Intrinsic, Lateral, movement, Posterior Spiral, principal actions, shock absorption, stability, stored elastic energy, translation of elastic energy 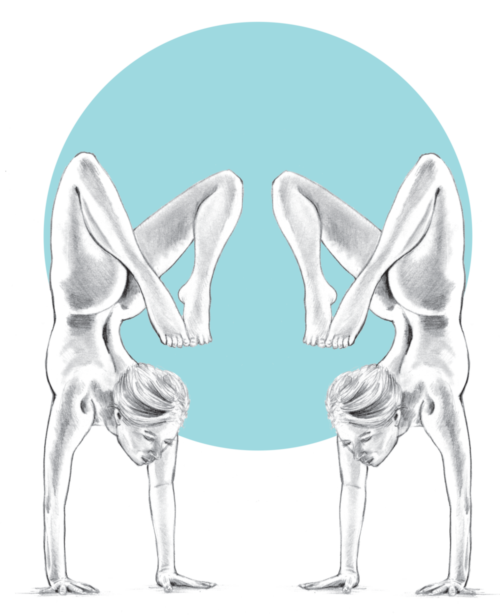 The law of adaptation: The organism adapts to its environment regardless of outcome. The nervous system does not differentiate whether an adaptation is beneficial or not.

I have seen several clients over the years, seasoned yoga practitioners, that had a similar root problem with different outcomes. The problem was a recruitment pattern with the toes. The instruction to “floint” the foot is to flex the toes while pointing the forefoot. This is also known as “Barbie Feet.”

Compensation in the toes creates global compensation patterns. These patterns occur along front and back kinetic chains. Kinetic chains can be understood as muscles that link together to create integration. When one muscle becomes inhibited, the chain is broken. This results in some muscles that are overworked, and others that are underworked. When the toe flexors become dominate, two different patterns can emerge.

Patterns of inhibition along the same kinetic chain as the toe flexors, along the front of the body are known as synergists.  One client had pain just below her hip joint in the front of her thigh. The hip flexors were inhibited by her toe flexors. Every step she took exasperated the problem. Another client had pain in the back of her thigh.  She had patterns of inhibition along the back of the body. This pattern is the functional opposite to the toe flexors.

There are other groups of people that have kinetic chain imbalances due to toe flexor dominance. People that wear high heels and/or flip flops are also high risk.