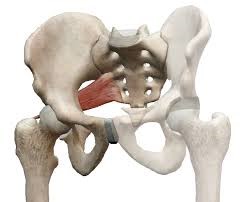 *Please note this particular series of blogs will describe each of the four muscles and their relationship to the five principal actions described in the charts of The 5 Primary Kinetic Chain Poster Set I’ve developed.  This is the first in a series of four posts.  You can find the second post on the Iliacus here.

Introduction to the Sacrum:

The sacrum, or sacred bone, is unique in the body. Mystics regard the sacrum as the focal point for kundalini, the spiraling energy that rises from the root through the crown. This triangular shaped bone provides the base of support for the spinal column.

There are four important muscles that act directly on the sacrum.

These four high level muscles often are not engaged with their task of stabilizing the sacrum through a spectrum of movement.  When we look at the function of these four muscles, and the various movement they are involved in, there is a trend we see in most people’s presentation that are seeking therapeutic intervention.

The anterior surface muscles are often up-regulated. These muscles are over worked and do not respond appropriately. One of the flavors of synergistic dominance is when one group of fibers becomes up-regulated, those dominant fibers then down-regulate the function of that muscle over its spectrum of movement.

The posterior surface muscles are often down-regulated and are not available to respond appropriately to movement.

The relationship of how these four muscles work together in coordination changes over the spectrum of movement. The 5 Primary Kinetic Chains have unique principal actions that inform the sequence of movement.  This series of essays will describe each of the four muscles and their relationship to the five Principal Actions I’ve described in the 5 Primary Kinetic Chains poster set.

The piriformis is a flat, pyramidal shaped muscle that runs from the anterior surface of the sacrum to the greater trochanter of the femur. The manner by which the muscle fans across the broad surface of the sacrum is somewhat similar to the subscapularis attaching to the scapula. The piriformis is an external rotator of the femur; the subscapularis is an internal rotator of the humerus, thereby making them functional opposites.

Many people have challenges due to the structure and function of their piriformis. Approximately one in 5 of us have piriformis anomalies (Read more here). Those that have this are often grouped into a category of “piriformis syndrome,” a pattern of up-regulated piriformis that irritates and compresses the nerve bundles, the sciatica nerve, that pass through the muscle.

People that have this presentation are often challenged by common movement triggers. Prolonged sitting, driving, and — for some — simply walking, is enough to exacerbate the pressure of the muscle acting on the nerve. 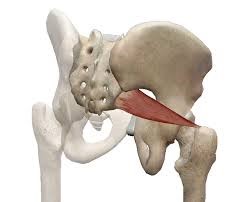 Concentric Actions of The Piriformis:

The Piriformis and The 5 Primary Kinetic Chains:

The relationship between the piriformis and the pelvic floor is often a good starting point for evaluation. The following two scenarios are common presentations:

The piriformis is a participant in the spinal wave during the breath cycle.

The body’s appropriate response to the kinetic wave of shock absorption is to counter with the push reflex. Imagine stepping off the curb. The hip must descend so that the foot can meet the ground. This is an eccentric action of the quadrates lumborum, the QL. An up-regulated piriformis down-regulates the push reflex.

The peroneal nerve, a division of the sciatic nerve, innervates the subsystem muscles of the deep longitudinal kinetic chain. An up-regulated piriformis that compresses the peroneal nerve will affect the peroneus muscles and the short head of the bicep femoris. When these subsystem muscles are unable to respond appropriately, the compensation is joint compression strategies that will move up the kinetic chain.

The gluteus medius attaches to the pelvis with a broad fan-like orientation of fibers.  The action includes abduction of the hip, and internal and external rotation of the femur. This is significant because some fibers act as synergists and others act as functional opposites. Often, select fibers of an up-regulated gluteus medius will functionally down-regulate the other fibers. This contributes to an up-regulated piriformis.

The coiling of the thoracolumbar fascia acts on the sacrum and the SIJ. The hip is extending and externally rotating. The piriformis is a synergist to the gluteus maximus, a posterior spiral subsystem muscle and sacral stabilizer.

Potentially any muscles in the posterior spiral kinetic chain could be in a synergistic dominance relationship.

Posterior spiral kinetic chain is paired with the contralateral deep longitudinal kinetic chain. The push leads the strike; the piriformi are in an alternating activation.

The anterior spiral pairs with the contralateral lateral kinetic chain. At the moment when hip extension translates into hip flexion, the ipsilateral iliacus and the piriformis are in functional synergist relationship.

The body starts to look for recruitments to assist an up-regulated and fatigued muscle. One common recruitment pattern is muscles that have similar fibril orientation. The lateral pterigoid is a common jaw remote relationship.

One important aspect of any manual intervention is to ask the body directly if the modality is appropriate. This can be verified by doing a little bit of release.  Go back to the relationship and take notice. Did the response change in a favorable way? If it did, then the release technique was appropriate. If it did not, then the nervous system needs something else to restore the coordination.

There are few strategies I regularly employ when working with an up-regulated piriformis.

This is a one of my favorite go to techniques. It is gentle and effective. There is little risk to further irritation of an up-regulated piriformis.

This active bilateral release can have a dramatic positive effect in the SIJ. The belt puts the SIJ in compression while the bilateral activation of internal/external rotation resets the receptors. The therapist can approach the release in two ways. One is to use feedback pressure to activate the balance between internal and external rotation. The other is to use bilateral pressure on both piriformi to reset the muscle spindles.

This flossing technique is a mixed bag. It can either be highly effective or over stimulate the nervous system. Ask the body if it is appropriate to the client’s presentation.

When assessing the players involved with sacral stability, ask if the players can cooperate with each other. Getting all the players back on the same team make for a happy sacrum.

Concentric activation ~ The muscle fibers are shortening; the muscle attachments are moving toward one another.

Eccentric activation ~ The muscle fibers are lengthening; the muscle attachments are moving away from one another.

Synergist ~ Muscles that work together during movement.

Functional Opposite ~ Muscles that work opposite to one another. One muscle is lengthening while the other is shortening.

Up-Regulated ~ An overstimulated muscle that is compensating for other muscle/s that are not participating. Often the muscle will become overworked and fatigued and unable to respond appropriately.

Down-Regulated ~ An under stimulated muscle. The function is impaired and unable to respond appropriately.