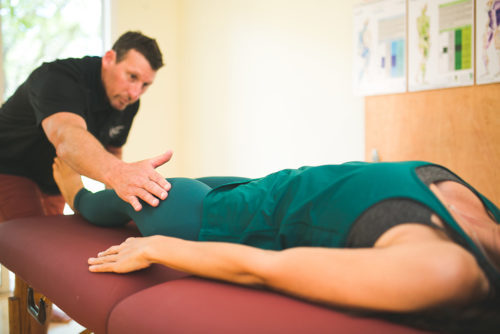 Muscles produce work in the body. They come in two distinct types, smooth and striated. Smooth muscles are governed by the autonomic nervous system. Their function is automatic. Smooth muscles perform the regulatory functions. The tissues that make up organs, the GI tract, and arteries utilize smooth muscles to perform their unique functions. Conversely, striated muscles are governed by the rules of conscious motor control. Striated muscles are often referred to as skeletal muscles. Their job is to act on the skeleton for posture and movement.

Skeletal muscles have a spectrum of roles.  Highlights include: work production, multiple joint stabilization, and position sense. Muscles need to be available to do their job in the movement equation. If they can’t participate appropriately, the brain will come up with a coping strategy. This is a survival-based mechanism, and this is what we call compensation. Compensation has many flavors, and despite a bad rap, it is the intelligence of the body doing its best to keep you safe.

Muscles come in many configurations. Generally, the large powerhouse muscles are more superficial, while the intrinsic stabilizers are deeper. Some muscles are specific in fibril orientation and function while others are available for multiple roles. For example, the large powerhouse muscles of the posterior chain, the latissimus dorsi and gluteus maximus, have multiple fibril orientations that look like a fan. This gives these muscles mechanical advantage over the range-of-motion spectrum.

For simplicity, let’s categorize muscles into two sets: short and long-lever. Short-lever muscles are the dependable hardworking muscles. They have mechanical advantage on the joint. The brain likes to use them as the go-to muscle during work production. Long-lever muscles cross multiple joints and have multiple attachments. Long-lever muscles are best suited for stabilization during work production. Their role is key when movement deviates and unknown variables occur in the environment.

These examples are samples of utilizing short-lever ~ long-lever muscle relationships to assess movement compensation patterns. The kinetic chain charts in The 5 Primary Kinetic Chains provide a map for investigating synergistic dominance, regional interdependence, and functional opposite musculoskeletal relationships. Muscles are in constant response to joint position in the movement environment. Can the muscles in conjunction with motor control instructions respond appropriately to the environment?

My upcoming Dynamic Neuromuscular Assessment™ workshops (learn more here) will provide an integrated strategy for movement assessment in a changing environment. Some of the key skill-sets we will employ: