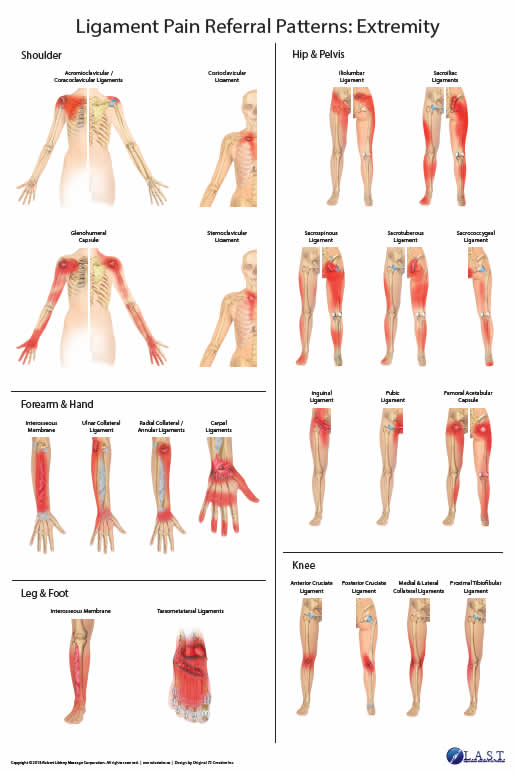 I was recently asked to review Robert Libbey’s new ligament referral charts. This is an important contribution to the therapeutic community. I’d like to detail a few reasons why understanding ligament function and pain referral is important in consideration for structural-based pain and maladaptive movement strategies.

The area in which we sense pain is often not the source of that pain. More often than not, therapists are trying to treat the muscles around the symptom of pain. This yields inconsistent results. Muscles aren’t always the source of the pain. Muscular behavior, tonicity, and recruitment patterns are based on the response from the brain’s motor control systems.

Ligaments trump muscles in the survival-based nervous system. Ligaments act as neuromuscular switches to increase muscle tone or decrease muscle tone. This reflects the neuromuscular relationship in movement called reciprocal inhibition. Reciprocal inhibition allows for muscles to act as a team. As one muscle activates or increases its energy output, its reciprocal partners deactivate or decreases their energy output. This fundamental principle is a primary function of ligaments providing somatosensory input for the nervous system to process and respond to.

Ligaments act as a safety valve in joint response. Ligaments also inform neuromuscular sequencing. When a ligament is stressed, strained or otherwise impaired, the afferent input signals that ligament sends to the cerebellum, switches off, or inhibits the muscles that would act on that ligament. This is a protection strategy so that joint movement does not further stress the impaired ligament. The impaired ligament does not need to be injured to send signals that would result in an inhibitory response. The result however, would mimic an injury. These errant neurological input signals can be reset with appropriate manual therapy intervention.

Here is an interesting fun fact about the somatosensory aspects of ligaments. There are two tracts of afferent information that goes from the peripheral to the central nervous system. The first tract, the spinothalamic tract is received in the limbic center’s thalamus. This information is processed and informs our kinesthetic awareness. This is the conscious field that is often referred to as proprioception. The second tract, the spinocerebellar tract, particularly has my interest. The majority of information that is received from the periphery directly to the cerebellum does not inform our conscious kinesthetic awareness. This is how movement occurs in the non-thinking place. The nervous system is responding to the changing environment without that person’s conscious volition .

Ligaments, both their assessment and treatment, have an essential  role in the structural therapist’s approach when working with clients. These important charts published by Robert Libbey, RMT, provide a visual reference to look deeper than the symptoms of pain. These are another set of complementary charts to add to your collection – Complementary Reference Tools.