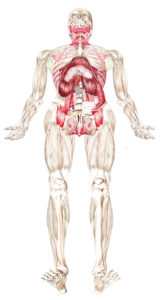 Let me introduce to you a key muscle that is highly noteworthy and receives a lot of well-deserved attention called the psoas. This muscle supports the musculoskeletal system through several important functions.

The psoas is a multisegment muscle, as it crosses multiple joints from the thoracic lumbar junction through each lumbar vertebrae. The psoas connects the axis of the spine to the appendicular function of the hip. In other words, the psoas attaches the trunk to the thigh.

The attachment on the thigh, the lessor trochanter, gives the psoas mechanical advantage in external rotation of the hip. The psoas is a lumbar stabilizer, a hip flexor, and is also a synergist in the breathing apparatus.

The psoas is central to movement stability.

Muscles that cross single joints, and are short by design, are hardworking dependable muscles. The nervous system can count on these muscles in recruitment and compensation patterns. However, muscles that cross multiple joints don’t have as much mechanical leverage (longer lever equates to more load on the fibers). What they are good at is providing dynamic stability while the shorter, hardworking muscles provide the power.

In the case of hip flexion, the function of the psoas is stabilization of the lumbar while its synergist, the iliacus, is the power generator.

The psoas is a multi-planer stabilizer that works in a three-dimensional context.

The psoas likes to work with its favorite partner in lumbar stabilization, the quadrates lumborum,(QL). The QL has a fascial compartment just posterior of the psoas. The compartments need to have the capacity to glide across one another so discreet function can happen in the sagittal, coronal and transverse planes. In sagittal plane movement the psoas and QL work in ipsilateral pairs on the same side. This is also true for the coronal plane. Though in the coronal plane, while one side is shortening, the opposite side is lengthening. This is called lateral flexion. The function of the psoas in the transverse plane is related to the walking gait. The transverse plane pairing is contralateral. One side of the psoas is working with the opposite side QL to stabilize the lumbar as the pelvis is moving around the axis of the spine.

The psoas is a primary compartment of the greater lumbodorsal fascia. This fascial sheath connects the torso to the pelvis so that the action of the appendicular skeleton and axial skeleton wind-up and release elastic energy throughout the cycle of the walking gait.

One really can’t talk about the psoas without mentioning its relationship to the breathing apparatus. The psoas is a key player in the spinal wave: the action that assists the cerebrospinal fluid pump. Further, the psoas shares connective tissue with the thoracic diaphragm. This is significant because when the psoas doesn’t play well with the breathing apparatus, the autonomic nervous system’s sympathetic arousal stays up-regulated. This cascade of chemistry from the sympathetic response hijacks the nervous system’s ability to cope. Said another way it results in stress. (Click here to see the video: http://www.youtube.com/watch?v=9JqFWUjxI1Q&app=desktop)